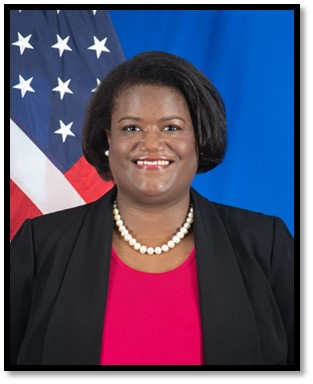 Ms. Ojikutu earned a Master of Arts in Law and Diplomacy degree from the Fletcher School at Tufts University.  She received a Bachelor of Arts degree in French from the University of Kansas and was a visiting student at L’ Université Paul Valery in Montpellier, France.  She grew up in Santa Fe, New Mexico and Lincoln, Nebraska, but now calls Blaine, Washington home.  Ms. Ojikutu is a former Thomas R. Pickering Graduate Foreign Affairs Fellow and speaks French and Portuguese.