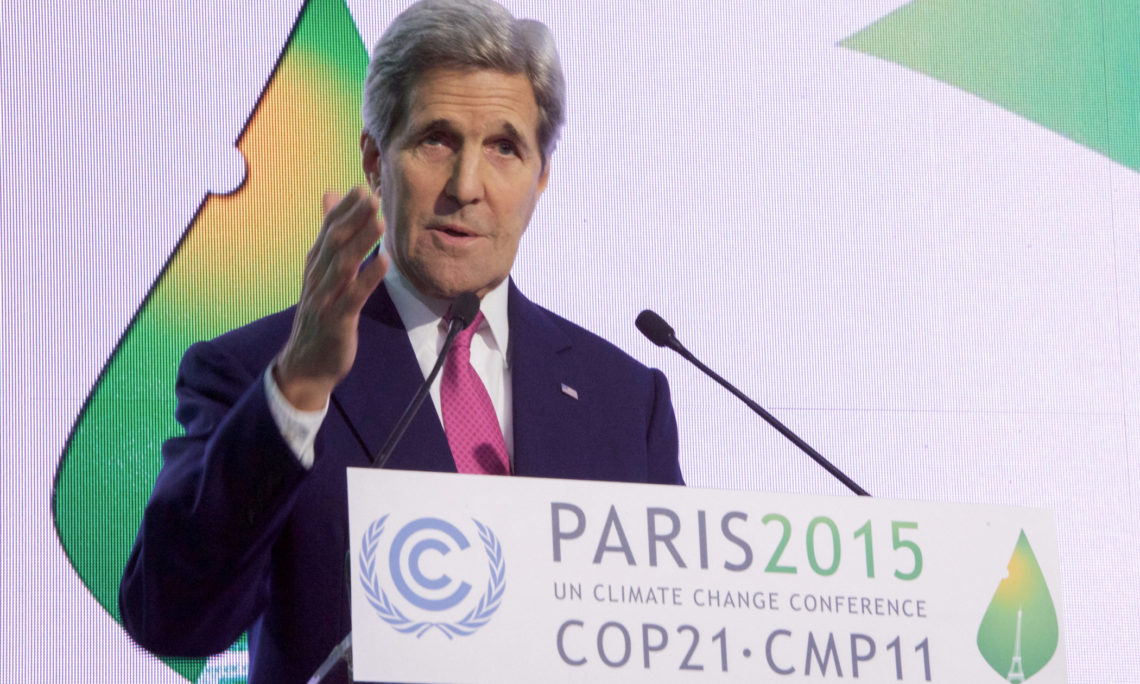 From rising greenhouse gas emissions due to deforestation, to the bleaching of coral reefs, the signs of climate change are all around us. As a global society, we are at a critical juncture where our decisions and actions today will shape the climate for our children and future generations.

The immediate benefits to keeping pollutants out of our environment are universal: cleaner air, lower energy costs, and new growth industries.

These are the stakes at the 21st Conference of Parties (COP21) in Paris, where representatives from almost 200 nations are gathered from November 30 to December 11 to negotiate a comprehensive climate agreement for the post-2020 world.  Now more than ever, there is social and political will to do something about the rise in global temperatures and its ripple effect through the environment. More than 160 countries, responsible for around 90 percent of global emissions, have announced climate targets. Previously under the Kyoto Protocol such targets were announced by countries responsible for only 30 percent of global emissions in 1997.

With countries like the United States taking a leadership role and others like China, India, and Brazil now pledging to reduce emissions, we have a serious chance to put in place a transformative plan. What role can the Republic of Congo play in addressing climate change?

Since the Congo River Basin represents the second largest contiguous rain forest after the Amazon, the United States is collaborating with the Republic of Congo and other partners to protect its rainforests and mitigate climate change. The U.S. Agency for International Development’s Central Africa Regional Program for the Environment (CARPE) is leading a variety of initiatives to achieve three goals—training and institution strengthening, improving tools to monitor changes in forest cover, and improving land use practices.

One of the biggest threats to the Congo Basin forests is the lack of solid information to monitor and manage forest resources. For that reason, Congolese scientists recently worked alongside American experts to learn mapping technologies at the University of Maryland. These collaborative efforts have produced state-of-the-art analyses of forest change for the Republic of Congo, providing Central African countries key reference documents to assess national baselines of forest carbon stocks and emissions. Such ability to monitor, analyze and disseminate information about forest cover change, greenhouse gas emissions and carbon sequestration at local, national, and regional levels will allow for better policy making and accountability based on current evidence. Partners included the U.S. Department of Agriculture’s Forestry Service, non-profit partners, and Congolese counterparts. The resulting maps will be showcased at the COP21 in Paris when environmental specialists share challenges and opportunities to address climate change in Africa. Mitigating climate change will also conserve Congo’s rainforests and help preserve the vast biodiversity of this ecoregion.

CARPE is also working with the Congolese to improve farming techniques and plant fast-growing trees for charcoal.

Some of the solutions for environmental problems are coming from Africa and elsewhere—like clean cook stoves. Nearly three billion people use inefficient stoves with open flames to cook their food. However, the exposure to smoke from to these open fires kills nearly two million people every year. It doubles risks for pneumonia and also causes premature death due to lung cancer and heart disease, affecting mainly women and children. Besides the adverse health effects, these stoves burn inefficiently and contribute to deforestation. Clean stoves provide a low- cost solution that is good for health and the environment. It stimulates new jobs and green energy alternatives. USAID’s CARPE initiative and its local partners are also beginning to extend these efforts in the Batéké plateau in central Congo.

The United States is taking bold action on climate change at home as we work with partner nations to do the same. Last year, USAID’s programs in the Congo Basin positively impacted over 16 million hectares of land and forest. Preliminary calculations indicate that activities reduced emissions by an estimated 14 million tons of carbon dioxide equivalent (CO2e, the “currency” of emissions measurement). Since President Obama took office, the United States has tripled domestic wind energy production and increased solar power twenty fold.  As a result, energy use is more efficient, and an historic amount of land and water has been protected for future generations. Going forward, the Clean Power Plan will cut emissions from the U.S. power sector by 32 percent by 2030.

With leaders and representatives from almost every nation on earth convening in Paris, there is an historic opportunity to strike a far-reaching and durable climate agreement.  We have the political will and groundswell of social support to make it work, but we will need to come together and be pragmatic in order to reach a deal.  For brighter skies today and a more secure tomorrow, now is the time to act.