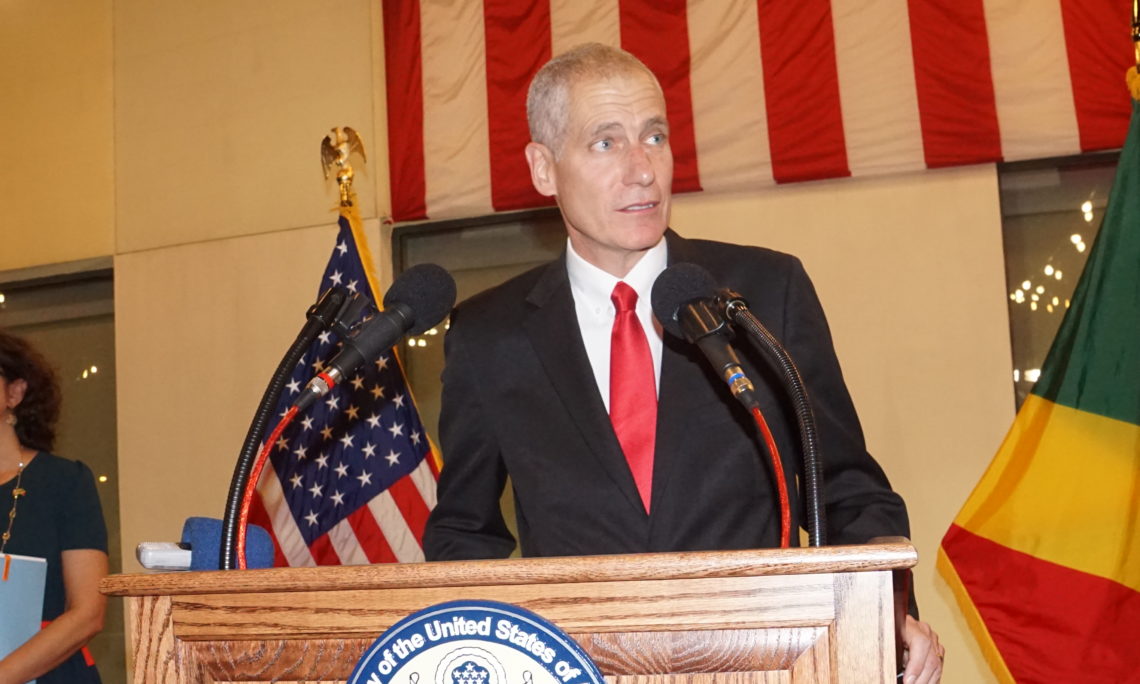 His Excellency the Prime Minister,

His Excellency the Minister of State, Chief of Staff at the Office of the Presidency,

Honorable Deputies, Ladies and gentlemen of the Supreme Court,

Dear Ambassadors and colleagues of diplomatic missions and international institutions,

Distinguished guests in your ranks, grades, and qualities,

Welcome to the U.S. Embassy in Brazzaville for the 241st anniversary of our independence.

I’m so pleased to join you for this momentous occasion as the new U.S. Ambassador to the Republic of Congo, and it is my privilege and honor to represent the U.S. Government here.

During my over thirty year career with the U.S. Department of State, I have served worldwide, but for my family and me, Africa feels like home.  I can’t imagine a better way to embark on this new opportunity than celebrating American Independence with you here in Brazzaville on the heels of your own local and legislative elections in Congo.

You may have heard that we had our own Presidential elections last year in the United States.

President Trump thus became the tenth U.S. president to serve since the United States recognized the Republic of Congo’s independence in 1960.  Since then, our bilateral cooperation with Congo has endured.  I have served during the terms of six presidents, Republican and Democratic, and indeed I was nominated by both Presidents Trump and Obama to be the U.S. Ambassador to Congo.

Clearly our commitment to good relations with the Republic of Congo is shared across the political spectrum in the United States.  And I want to be clear: my top priority here is to work with the government and people of Congo to strengthen that relationship.

Today we commemorate the Declaration of Independence — that key document that asserted our nation’s autonomy and articulated that all men are created equal and entitled to unalienable rights such as life, liberty, and the pursuit of happiness.  Coming from Washington D.C., I can affirm that democracy is as vibrant as ever.

Across the world, I have discovered that people generally share the same goals – to live a healthy life, in peace and prosperity with better prospects for future generations.  To boost the economy, countries need to create a desirable investment climate.  Businesses seek stability, infrastructure, transparent and functioning banking systems, and reliable partners.  We want to expand free and fair trade.

I’ve experienced Africa’s impressive talent and potential through interactions with young Africans through the Young African Leaders Initiative (YALI).  These philanthropic and entrepreneurial young leaders will help Congo diversify its economy, create jobs, and become the leaders of tomorrow.

I am also very excited about the prospect of launching 24/7 radio broadcasts by Voice of America in Brazzaville and Pointe-Noire which will bring international broadcasts to citizens in Congo.

We share a common interest in working together to promote regional security. President Donald Trump has said we want a world that is “more peaceful, more just and more free.”  He has said that we want to quote — “forge new partnerships, where shared interests align. We want harmony and stability, not war and conflict. We want peace, wherever peace can be found” – end quote.  I am convinced that the Republic of Congo shares those interests.

We are so pleased to support visiting American singer Shola Adisa Farrar and her group who are performing here this evening.  They will perform at the French Cultural Center on Saturday and next week in Pointe-Noire.  Jazz is a musical heritage developed in the United States, but emanating from the culture of those African slaves.  What better way to celebrate American freedom and liberty here in Africa than an Independence Day celebration with jazz– this improvised, free-form music that transcends borders.

Through our collaboration, together we will build a stronger partnership and work toward a more democratic and prosperous Congo.  As Walt Disney has said, “If you can dream it, you can do it.”

Thank you again for coming, and thanks to everyone who worked so hard to make this evening a success.

Happy Independence Day to everyone.